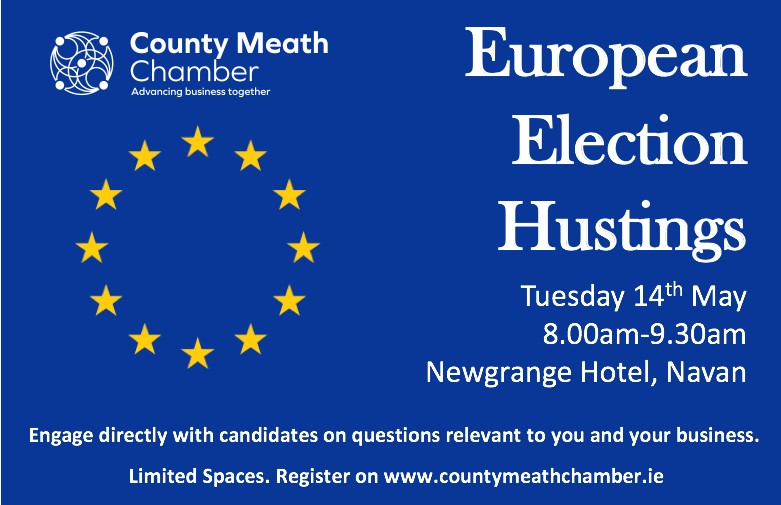 Ahead of the European Parliament elections on the 24 May, County Meath Chamber invites the business community to join us on Tuesday 14 May at our European Election Hustings, where you can meet and hear from the candidates running in the Midlands North West constituency. The objective of hosting a husting for candidates will be to give the business community in Meath the opportunity to engage directly with the candidates and ask them questions about the issues that are most relevant to you and your business.

Meath Chamber is the leading business organisation for the promotion and development of economic and commercial activity in County Meath. We are a part of Chambers Ireland’s network of 41 chambers across Ireland. In addition to advocating for business on national issues, Chambers Ireland also represents the network at the European level through their membership of EuroChambres.

To remain involved in the discussions on issues such as climate change, investment and taxation, Meath Chamber visits Brussels once a year to advocate on behalf of our local enterprises. On one such trip to Brussels in February of year, Chambers Ireland launched a European Elections Manifesto, calling  on candidates to prioritise a Europe that is open for business. Those candidates who wish to represent Ireland in Brussels must strive for an SME friendly Europe, investment in regions with an emphasis on developing rural areas and a more sustainable economy and environment.

Speaking ahead of the event, Chief Executive of County Meath Chamber Paula McCaul said, “The European elections that will take place in May, could be the most divisive yet in determining the future of Europe. As the voter turnout in European elections tends to be low, it is vital that citizens elect candidates who will represent Ireland's interests, to avoid further political fragmentation and economic uncertainty.  County Meath Chamber is calling on its business community to engage and we look forward to fruitful and engaging discussions with candidates about how we can build a better European Union that supports SMEs and support small open economies like Ireland.”

The candidates participating will be: