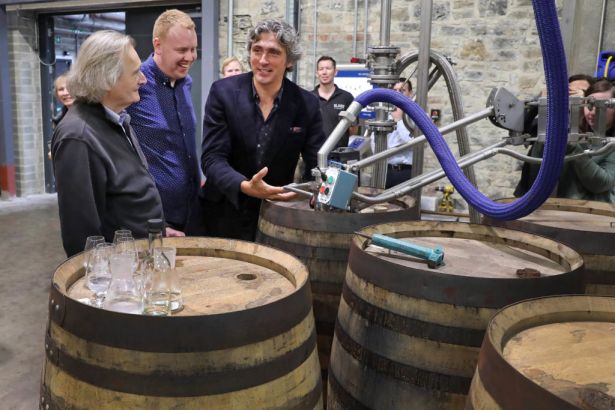 Slane Distillery, the recently-opened whiskey distillery located on the grounds of Slane Castle in Co. Meath, celebrated a major milestone this week when it filled its first barrel. The inaugural cask contains new make malt whiskey using barley harvested on the Slane Castle Estate filled into a sherry hogshead.

Brown-Forman began construction of Slane Distillery in collaboration with the Conyngham family of Slane in late 2015 and introduced Slane Irish Whiskey in mid-2017. This triple casked blend of Irish whiskey was sourced from other Irish distilleries and was then matured using Slane Distillery’s signature Triple Casked method, which uses virgin oak, seasoned whiskey and sherry casks. This week marks the start of phasing in distillate to Slane Irish Whiskey that has been produced onsite at the distillery.

“This is an important milestone for any new distillery, but one we are especially grateful for at Slane Distillery,” said Alan Buckley, assistant manager of Slane Distillery at Brown-Forman. “It’s rare that you get to build a distillery from the ground up, particularly one on grounds as historic at the Slane Castle Estate. That’s part of what makes this first barrel that much more special.”

Slane Irish Whiskey co-founder Alex Conyngham commented, “This is a very special occasion for my family. We could not have accomplished this much in such a short space of time without the partnership, knowledge, and expertise of Brown-Forman, the talented production team at Slane Distillery and the support of the local community in Slane. I am honoured to play a part in bringing whiskey production back to the Boyne Valley.”